Saw this pop up on my feed today, compared to the red’s they seem same same only different. 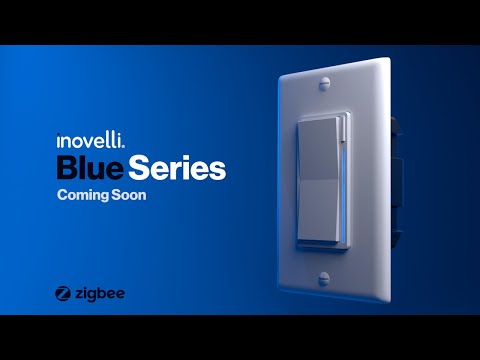 What do people here think of Inovelli? I currently have TP-Link Kasa dimmers throughout the house, but I have been looking to switch for a variety of reasons. When comparing these to Caseta, I feel like trading ClearConnect for a notification bar and more configurable actions seems pretty good, especially if the ZigBee is rock solid (which in my experience it usually is).

Question for the OLL folks: Are you guys in talks with Inovelli directly? IIRC they have a pretty good partnership with Hubitat and I imagine they would be on board with what you guys are trying to do.

I’ve been following the breadcrumbs on the Inovelli site here:

Pre-Orders open now – expected release is mid-July: Single-Pack 10-Pack NOTE: This is an alternative version we’re doing some R&D on in that it will combine the On/Off and Dimmer switch to create one switch. We’re still running the other...

I only have 1 of their Red series switches (the LZW36 combo fan/light switch, zwave). It works reasonably well, but it’s zwave. Tons of configuration options and more features than I could possibly use…

The dimmer and/or switch combo (they call it a 2-in-1) is in beta now. I’ll be picking one up once they hit the market… sounds like May/June timeframe.

Here in the US, income taxes are due…

current timeline for these to go on sale is April

Latest from Eric @ Inovelli is pre-orders in April, targeting early May for release. I’ll be getting at least 2 to replace a couple of troublesome z-wave switches that just won’t operate reliably. Inovelli is getting set to have these work right off the bat with HA - a placeholder ZHA quirk is already up on Github. @april.brandt @markus can you tell us how device handlers will work to start with? Will it look something like the quirk system, or do you have a radically different way for us to bring in new devices?

Nice profile pic you got there

If you find that it goes on pre-order, make sure to post the link here as I think a lot of those in the community would want to buy in.

This is the best alternative to Lutron Caseta IMO. Their Z-wave switches are pretty good and they are very active for fixes. I might get a few just for the notification LED and Load bypass for my HUE bulbs.
I only have Caseta switches now and thinking about z-wave switches give me nightmares.

This is the best alternative to Lutron Caseta IMO

Yeah I agree, except for one point, their dimming performance. IIRC it has always been very choppy and I am not aware of them pushing out a fix yet. I hope they got in under control with the blue series.

thinking about z-wave switches give me nightmares

owning them is worse. Wish I’d had more options in the zigbee realm when I did my house… now it’s going to cost me more to replace. Lutron will happen when we down-size. I can’t afford to outfit this house with their products, unfortunately.

thinking about z-wave switches give me nightmares

owning them is worse. Wish I’d had more options in the zigbee realm when I did my house… now it’s going to cost me more to replace.

My hope is that this experience is a Hubitat issue not a Z-Wave issue, which based on what I have heard from the OLL team seems to be about right.

Nice profile pic you got there

Yeah I agree, I hope whoever took that did not pay a lot for the camera they used.

I can get you a used one in 10-20 years. Delivery NOT included

The BETA testing group has hinted that it is improved in the Blue Series, but you are 100% right… The choppiness of the dimming with Red/Black Series is annoying at best.

Lol I love you guys and the enthusiasm! A few posts up I talked briefly about the 10pks and that they will exist, I’m just waiting on getting an official quote before I can put pricing. The last thing I want to do is open up pre-orders with missing...

It looks like next week is going to be an announcement. There already is a product page with prices though. They are a bit expensive, but ehh, they seem like a great company to support.

And now a setback stemming from delays in the UL certification process:

Project Update: A little set-back and this is why I always get nervous opening up pre-orders. However, I’m thankful this happened prior to opening them up vs after. UL came back with some comments that we had to think through, but ultimately made a...

Pre-orders are open - I snagged two contractor packs to replace the zwave garbage I have now. Can’t wait until July…

Do you know if there are any active coupon codes other than the free shipping?