So I just noticed that 6 of the blue LED’s for my Yeelight light strip which are on undercabinet light duty just burned out and of course they are on a section that cannot be replaced. Anyone have any good recommendations for high value RGBW light strips? Individually addressable would be cool but definitely not a necessity, I have been thinking about replacing these as they do not recover from a power or network outage gracefully, so this is probably a good of a time as any. That being said, I could live with it if people know of a few promising products close to release or if there is a better time to buy these sorts of things.

I made my own with ESPHome controllers. I know that @LosinIt just did a zigbee solution for his cabinets that turned out nice (IMHO). Maybe he’ll pipe in later. If you want me to elaborate on my setup let me know.

Thanks for the offer, but I am not really in the mood as of late to be taking on that level of a DIY project, plenty of other things still on the list. That being said, do you prefer ESPHome over Z* products now? If so why?

I think i still prefer Zigbee. But the use case was good and price was right for something reliable. For lights, Zigbee controllers can get pricey. If you have a good wifi setup, it’s very fast.

Anyone have any good recommendations for high value RGBW light strips?

I got the BTF-Lighting strip and I’m very happy with it. Note, however, that the only other one I have (not installed) is a Sengled strip with controller. The BTF strip is WAY better…brightness, color as it should be, density. But I’m using a Gledopto Zigbee controller with the BTF and it is crappy, IMO. Transitions are jerky and other oddities. In contrast, the Sengled controller does a great job. Too bad it’s not the same voltage (I went with 24V because I have a relatively long run) or I’d look into using the Sengled controller with the BTF strip.

@RRodman is way into the addressables so maybe he’ll chime in.

I have over 100M of their addressable LEDs, being used in various ways. I have yet to have a single issue with them, and several have been in use 24/7 for over a year now.

Personally I am all about building your own controller to drive them, for most projects a D1 mini, power source, 3 wires and flashing over usb with the program of your choice is all it takes to have smart enable lights…

Maybe I should write a smart led project write up or two?

I’m using WLED on wemos d1 minis for my addressable strips, if I was going to do it again I’d try the apa102 strips. They supposedly have better dynamic range with a controller that supports it, I was looking into pixelblaze if I was to make that change

Ill be honest, real world applications, unless your building a MASSIVE or 120fps display you will never notice any differences. The apa102 strips use SPI which allows for faster commands to be sent, which is why it is better for high refresh uses. In terms of appearance of the colors saturation etc… There is no visible difference to the human eye, and the “higher range” of colors is actually down to the PWM frequency, which you can also adjust in WLED etc.

If you like to make things complicated, like writing code, overspending or just want bragging rights for going your own way etc, then go with the apa102. If you want simplicity, wide range of support, arent driving a massive display from a single controller, and don’t need faster than 60fps refresh the ws2812b are the way to go. (and most of those limitations can be eliminated using as ESP32, and the proper config of your preferred firmware/platform.

You’ve definitely got more experience with the stuff than I, probably saved me some money so thanks for the info

Anyone ever try out Inovelli’s light strip? It seems a bit expensive but they seem like a great company to support.

I have one. It works well. They were touted to have individually controllable led but they had problem with the manufacturer / firmware and it never happened.

It does have a bunch of animations programmed in. Works very well. Never have any trouble with it on the zwave network.

I made my own with ESPHome controllers

Full diy or did you flash esphome to an off-the-shelf board? If the gledopto controllers don’t work better with CORE than they do now, they’re getting replaced with something that will

Flashed an off the shelf controller. It’s been indicated to me that the gledopto work really well on CORE. I think you’ll be fine.

I have one and I wouldn’t use the words “really well”, at least not with zigbee2mqtt. The only other strip controller I have is a Sengled and I’ve not installed it because the strip isn’t impressive but I did play with it on the bench and found that it works “as expected” for a guy that’s had no others. By comparison the Gledopto is choppy when turning on/off and for color temp changes. The Sengled at least is smooth with the same changes. I thought about cutting the strip off the Sengled controller and using it but it’s 12 VDC while my strip, and Gledopto, are 24 VDC.

I’ve not paired either brand with HE so I can’t cite differences with that hub. And I’ve not used any Hue lighting so I can’t compare there either.

I have no wishes for another LED strip anywhere but if I did, or do later, I’ll avoid Gledopto if at all reasonable to do so.

I used about 90 meters of BTF strips and WLED for my roof outdoor holiday lights. They have been pretty solid, but you can easily overheat them when soldering strip pieces together. 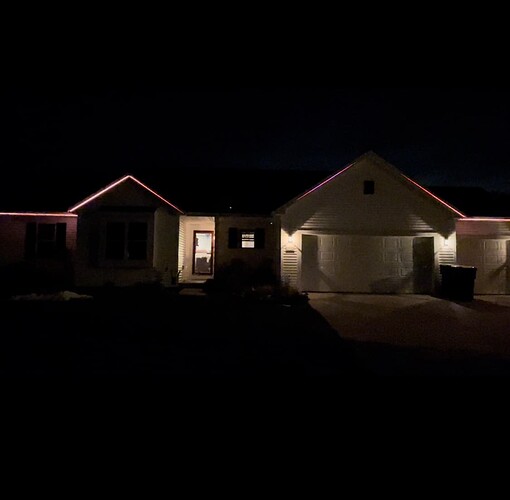 Found this deal that seems to be pretty good, but are the Sengled ones really that bad?

Sengled ones really that bad?

I’ll put it this way…if this is your first strip I think you’ll be happy with it because you don’t have one to compare with. Plus I’ll call this item a great deal at that price. One thing though, do you really want a 240 volt supply? You’re timezone indicates that 120 is most likely what you want.

strange, I didn’t notice that, I have a feeling that is just an oversight for NA markets.

Found this in the Q&A

My only other experience is Yeelight Aurora strips.

No clue about them

Seems like smoke and mirrors. You don’t need the smart hub or the switch, do you? I just did my lighting out under the pergola.

and and ledenet controller flashed with esphome.
I concealed it in

I’ve learned from cheap led in the past that color is everything. Although you’d probably be happy with the sengled, (I use their bulbs), I’ll never buy anything other than BTF. The color is beauuuutiful compared to the other solutions. You can easily choose an independent controller for your use case and would not have to use ledenet and esphome. There are zigbee controllers that are very reasonable. They even make them for outdoor applications. You can get IP rated leds from there as well.

Also, something to mention. I found that you have to be very careful with the cheap leds on brightnes. You can burn them out just by running all colors at max bright. The BTF ones you don’t have to worry about that. I’m not sure about the sengled.