This sneek preview of the UI - courtesy of the Indigogo page - already looks promising. It’s showing some form of rule configurator, with nice use of colour and a smart layout/UI (a “state” machine maybe…i spot initial and end states, and filters and “side effects”). I also spot apps, logging, tools, security etc. I’m hopeful it will be easier to use than Home Assistant! 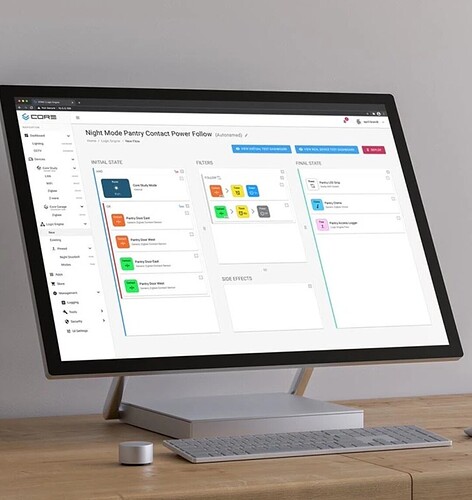 Lots of unknowns at this time but we’ve been told there will be a coding/scripting environment too, using Typescript as the language.

Excited to see the final unveiling.

Not being a member of the team I speak only as community member, like you.

Don’t let preconceived notions of what is, limit your thinking of what can be.

CC will not be either, it will be it’s own.

I’d like to know what desktop PC is used in that photo!

what desktop PC is used in that photo!

pretty slick huh? me too!

I’d like to know what desktop PC is used in that photo!

It’s a Microsoft Surface Studio pretty sure, but the OSX style browser is a bit confusing. Its built for artists/architects that sort of thing. It can go down to the same angle as a normal drafting table.

And then I googled the price - ooowwch.

but the OSX style browser is a bit confusing.

Yeah cause reimaging the disk, would take more work than dev’ing a hub platform lol

And then I googled the price - ooowwch.

Yup all surface products are very premium and have the price to back it up. It has a lot of cool features including the pen and the surface dial, just 90% of consumers don’t really have a real use for them. Niche product results in low demand and low supply so they can charge whatever they want.

ehhh… mostly yes, I agree. Kinda like the latest Mac, are they really worth it…ehh. Is there much better. no.

Microsoft - How can we compete with people that want to spend money and Apple is eating our lunch?

Answer - build our own fancy pretty machine and charge the snot out of it! Hurray!!

ehhh… mostly yes, I agree. Kinda like the latest Mac, are they really worth it…ehh. Is there much better. no.

Yeah 100% agree, are they worth it? Probably not, but as with basically all premium products, the law of diminishing returns is definitely present. But if you want those extra features or want the extra build quality, or dare I say, and I hate to say this, but the extra clout, that is where they get you most of the time.

Answer - build our own fancy pretty machine and charge the snot out of it! Hurray!!

I mean they tried with Windows Phone to reach the masses, which I personally loved, and most of my android phones attempt to mimic that operating system style, but the market rejected it, so they basically are just do what Apple is doing, just not nearly as closed of an ecosystem in my experience.

My wife was in tears when I told her they were not made anymore.

just not nearly as closed of an ecosystem in my experience.

The should just rebrand to find a market following.

The should just rebrand to find a market following.

IDK, I am not sure how fearful they are of Apple, because outside of the US, doesn’t Apple have a lot less market share and Microsoft is massive in the corporate and server sector, which is worldwide. Like I imagine they see them as competitors for sure, but if it were a race, I get the impression they would be trading places often.

Correct me if I am wrong, but Apple does not do anything other than consumer electronics/software?

Correct, but enterprise software solutions don’t bring the margins Apple demands. MS might have market share, but it’s to a market that has ‘control’ over the vendor. Who wants that kinda client. Apple would be happy to let MS serve 60% while taking ton of time and expense to do so. They’ll just keep racking in the “easy money” unless someone gives them a decent fight for it.

Not a Mac fan just an outsider looking in.

I am both a mac and microsoft user. imac, macbook air, windows 10 pc, surface pro 7.
Surface pro 7 is my fav of them all. It’s a killer device for contractor like me when dealing with clients on a daily basis.
My wife on the other hand is totally opposite. I am losing the Android to Iphone battle and most likely her next phone will be an