So I was looking for some variety in my office. I definitely don’t have enough light in there, but at times there is too much. I thought of getting some more Sengled to control the levels, but it seems that they are difficult to get and have increased in price. (At least from what I’ve been able to find)

Then I watched Paul Hibbert’s review on the Shelly bulbs. When in the HELL did that happen? Bulbs? Seriously? Let’s order … EIGHT!

They arrived I picked them up today. Shipping was unclear from Amazon and they ended up coming from a drop shipper by priority mail. I missed the notification that they had been delivered. BY 3 DAYS! I need to pay attention.

So I spent a few minutes rearranging things because my electrician hasn’t been by to do the outlets yet. All of my outlets are full! How did this happen? So I pulled the lamp in my office and swapped that to a hot outlet (switched outlets, PITA!) and popped in the bulb and hooked it up. The mobile app seems to need a bit of work, but I’m assured that it’s very temporary. They’re actively working on things over there at Shelly. I can live with that. The features already surpass anything else out there in the app. But, I’m hoping to be able to automate them entirely so that I won’t have to pay too much attention to them. Just as soon as my electrician gets here to hook me up.

So after I updated it, I immediately headed for the controls to check out the dimming levels, which is absolutely insane. Paul wasn’t lying about how dim these bulbs actually get.
This is a photo of the light set at 8%. My phone actually compensates for the low light, so it’s difficult to get an accurate representation of how dim these bulbs actually get. Also the ability to move the warm/cold slider allows you to set these at the temperature that fits your needs. I’m looking forward to working under these lights. Just as soon as my electrician gets here to fix my wall plugs. Switched outlets are NOT my favorite. 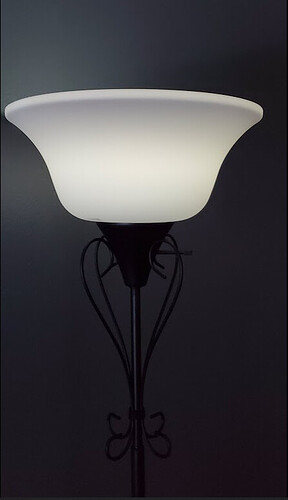 Moving on to the app interface. There are a ton of options here. I think the Shelly developers thought of everything. Schedules, modes, security, time servers, timers, cloud options. WoW! You are also able to connect to each device individually via a browser. Nice touch Shelly! 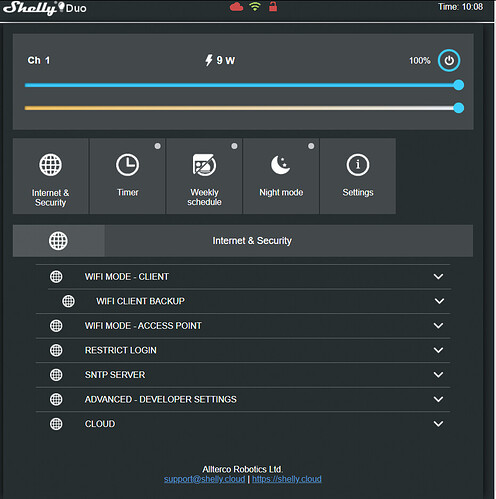 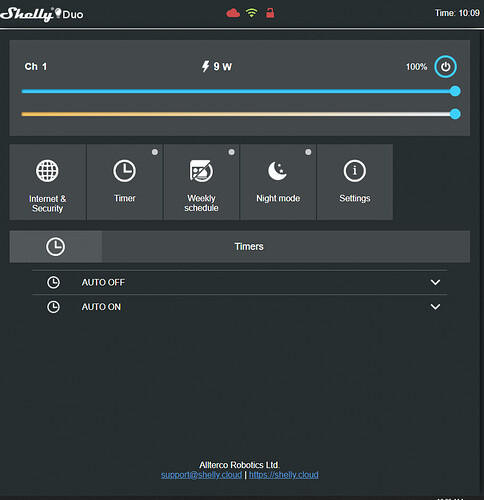 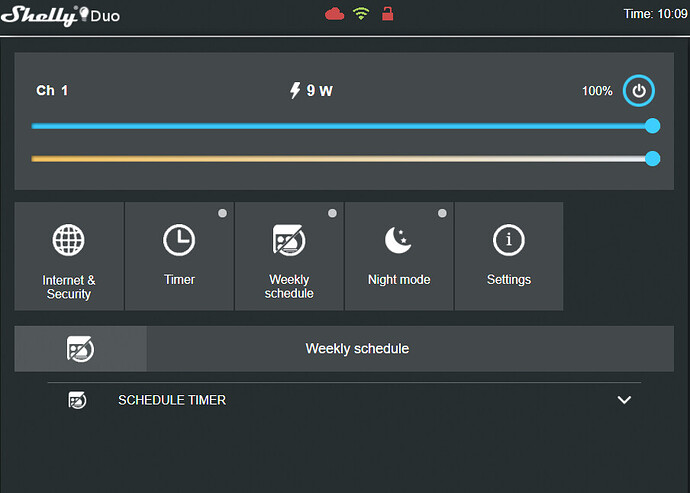 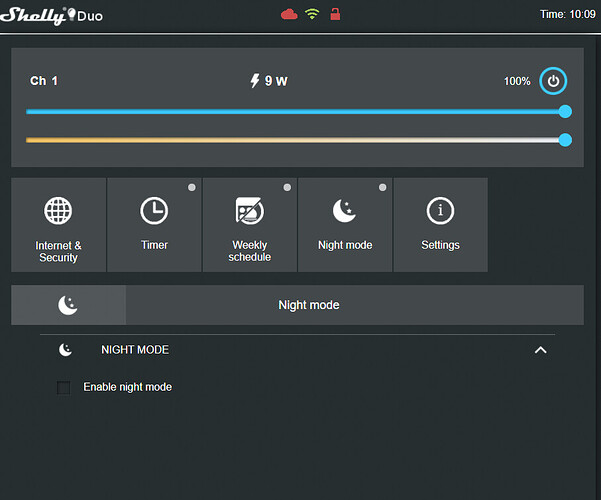 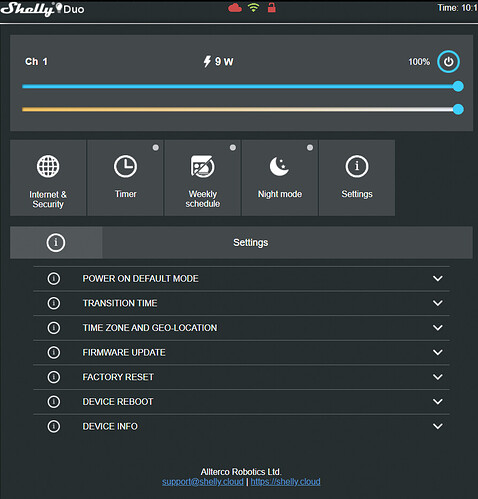 So, this is what I know so far. I’ll work on getting to know the interface and integrating them into my ecosystem and report back on this. I have to say that I’m immediately impressed with the shelly features I was able to discover in the first five minutes. I also get a Shelly 1 for my bathroom fan. Again, waiting on the electrician. I can’t anticipate not liking anything Shelly at this point.

All of my outlets are full!

Not the most aesthetically pleasing remedy but with all the HA stuff being very low power I find the multi-outlet adapters very useful.

All of my outlets are switched. Once I get that resolved there’ll be plenty of power.

All of my outlets are switched.

And WHO thought that was a good idea??? Oh, yeah, the goofy previous owner.

WHO thought that was a good idea???

Pretty common with older homes before over head lighting was “normal”… I had to reconfigure outlets in my house as well.

We’re basically reconfiguring everything little by little in our house. The previous owner never really tightened the screws in the outlets, so we’re very afraid we’re going to have a fire. Our furnace was wired with an extension cord, we found charred expand-a-foam in the walls. It’s been … interesting. So, we’re having things wired correctly where we can and doing what we can to remedy the issue. The last push, the electrician will be installing two new fans, replacing outlets in the basement and installing 4 overhead lights and a fluorescent in the laundry room. Then, I believe everything will be smartened up. I’m having him put an outlet in the ceiling so that I can put an LED strip in the basement hall, which can’t have a normal light because the ductwork is up there. Code won’t allow a normal solution, so I’m thinking outside the box again. I don’t even know where that box showed up. It seems I’m never in it, anyway. Wonder if I can sell it?

Did you happen to get any of the RGBW Bulbs? Interested to see how they compare to Sengled.

Also can you use the app local or just via cloud?

EDIT: OK one last questions, have you tried them with the NR nodes? (not one for bulbs, but dimmer might work)

Do they require cloud?

I picked up a pair of Feit bulbs at Costco for $10 because I had no color bulbs and figured I’d put Tasmota on them because I have nothing with it now. Curses, foiled again. These have a new brain (Tuya WB2L) and can’t be tasmotized. I tried setting them up yesterday with their Android app but couldn’t get it done w/o cloud so the bulbs are relegated to the “maybe someday” drawer for now.

Do they require cloud?

No, they are ZigBee (non repeating) on HE waiting for CC.

I use their “normal” bulbs, candelabra, and strips all are decent color, not super bright but decent. Most my closets have strips now, at 2700 they are bright, but not as bright on other settings (use a softer hue for TV bias lighting and not nearly as bright, but not needed either)

EDIT: I also use their BR40 recessed light and the outdoor floods, all good devices, and I like they fact that one company can solve 90% of my color lighting needs.

I do recommend Sengled. It’s just that the Shelly’s look interesting as well, and the ability to send Wi-Fi long distances solves the repeating issue.

I had to reconfigure outlets in my house as well.

I solved this by installing Zooz dimmers and putting them in smart bulb mode. Outlets are now always on, and the light switch acts as a button device I can configure as I please.

Did you happen to get any of the RGBW Bulbs? Interested to see how they compare to Sengled.

I didn’t get any of the rgbw. I considered it, but in the end, I would not have needed it. I have singled bulbs as well. Whites. And I think they exceed the Sengleds. Dimmability is definitely superior with Shelly, but responsiveness is probably not noticeable. But my Sengleds are zigbee and Shellys are wifi. I have a unifi system, so it’ll take what I throw at it.

Also can you use the app local or just via cloud?

I am using only local. If I remember right, you can’t use the cloud features if you don’t enable them, but I think you can use the timer features, etc. I’m only using it locally as it’s on my firewalled vlan.

EDIT: OK one last questions, have you tried them with the NR nodes? (not one for bulbs, but dimmer might work)

I have not. I want to! And I will. I’ve been busy with a home project this weekend. I’ll fire them up this week. I might need some assistance from you if you’ll have time for me later in the week?

I might need some assistance from you if you’ll have time for me later in the week?

any time, happy to help. Don’t have any Shelly’s…yet but gonna order a couple RBGWs for testing.

I have a Shelly 1 on my counter waiting for the electrician to appear and I’ve got a couple more on the way for some random switches that don’t need fancy switches. I want a button. Have you seen the button?? You can put it outside! It will find a place on my newly built patio that will control light scenes when we’re sitting around the fire pit. Super stoked about that button. I’ll have one before summer.

Have you seen the button??

Since the ST button is MIA for now I snagged a few for the gate house arm, and other triggers.

Super reasonable pricing even with the shipping.

I solved this by installing Zooz dimmers and putting them in smart bulb mode. Outlets are now always on, and the light switch acts as a button device I can configure as I please.

Well, that is one way to do it.