Pi to an SSD and HAF

I’d been tossing around the idea of upgrading my pi to boot from an ssd instead of keeping it on an SD Card. So I pulled the trigger and ordered up the parts. After I got home tonight I took it all down and started the process. I was sitting in front of the tv with my pi (yah no hdmi monitor) when my husband appears in the living room. “The lights don’t work”. SMH I told you they wouldn’t. “But I need the light on. Which switch is it?”
I’d say that the Husband acceptance factor is optimal if he’s complaining about things not working.
If it’s any consolation, it was super easy to do. I have a Pi 3 B+ and used this video to pull the swap. 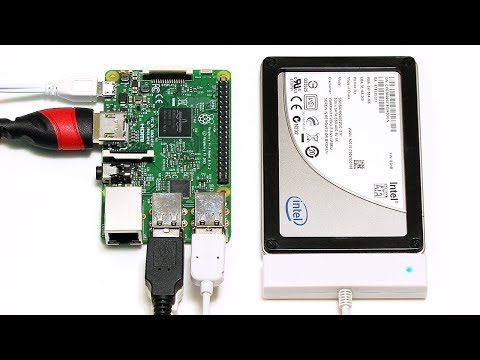 It was pretty much the first one I found. Straight forward and worked fine. It was seamless. Oh and the lights are working again and he’s no longer stressed about which light switch he needs to press to get the light to turn on.

Pi 3 firmware has supported SSD booting for a long time.

If you have a pi4 you may need to update the firmware. Also be aware the pi 4 is picky about the type of USB/Sata interface. I use the one made by Sabrent (easily googled) which works perfectly fine.

I use USB to SSD for my 3 RPi 4s and the update process was pretty easy. After I did the 1st one, I ran some benchmarks program on it and one of the ones not updated yet and the SSD one was significantly faster. I just can’t remember name of benchmark program though.

I definitely have more confidence in an SSD not crapping out. I still backup the important Node Red files nightly (not entire .node-red directory).

I definitely have more confidence in an SSD not crapping out.

SSD quality seems to vary quite a bit. I had a cheap SSD crap out in less than a year. Waiting for a replacement to come in. Here’s the error that repeats 100s of times. And fsck can’t fix the error:

This was the SSD that failed:

But it didn’t like any of my enclosures. Lucky thing I had ordered one of these, which worked.
https://www.amazon.com/gp/product/B07Y825SB8/ref=ppx_yo_dt_b_asin_title_o01_s00?ie=UTF8&psc=1

This was the SSD that failed:

Apparently QLC drives (which the one linked to is) are not as write reliable as TLC so could be the cause of the early failure.

Thanks for the info @april.brandt I’m toying with the idea of implementing HA and might build a Pi or the like to run it. Holdng off till I see “what’s new” and available

SSD quality seems to vary quite a bit

SSD (and all Flash based media) can vary widely in price and performance/reliability. If what your building is going to be used long term, IMO, you should use a decent brand. The minor cost saved is not worth the headaches caused down the road. I avoid all ‘generic brands’ and stick with Crucial, Kingston, WD or the like.

I avoid all ‘generic brands’ and stick with Crucial, Kingston, WD or the like.

I’m sure that the $19 kingston I purchased isn’t the high end of the spectrum, but I’m planning on maybe getting a better pi this year. So, I’ll definitely do a better ssd that will support performance and reliability. Right now I have two means to run node red, so I’m working out a way to make it redundant. I’ll probably do some type of write up on it once I get it figured out.

I’m planning on maybe getting a better pi

On a tangential note - pi 4’s also generate more heat than the 3 so a good case/heatsink is essential. A fan is great but those dinky fans that you see around (even the good ones) are noisy. I have an 80mm silent fan in a custom housing blowing air over the pi. With the fan I can reduce CPU temp by about 10C.

Good to know. Mind posting links to what you’re using?

An argon neo case . Pretty decent although I wouldn’t gush about it like other reviewers do, Nice all metal but it does need the top off for best cooling. You’ll see people use the same brand fan hat although I wouldn’t recommend it with this case as there aren’t any vents for air to move through.

I recently decided to try this as well - I swapped one of my my Pi 3 B+ with an SSD and couldn’t believe the difference. My goal is to switch my other Pi 3 B+ over (have the stuff sitting right here to do it, just need to make the time).

I did not choose a powered sata, so I’m going to order one up and get it going. I get low voltage errors on it a lot. I hope that this helps me. It is night and day, though.

It is night and day, though.

Absolutely! and if anyone here is still running a hard disk in your computer, upgrade today!

I did not choose a powered sata, so I’m going to order one up and get it going. I get low voltage errors on it a lot. I hope that this helps me. It is night and day, though.

I have also been getting a lot of low voltage errors as well, what powered sata adapter/enclosure did you end up going with?

I got a cheap one that isn’t an enclosure and I’m getting low voltage errors. I think it’s because I’m not using a pi power source.