… that you can reorder the shortcut icons on the top of the sidebar in Node-RED just by dragging them into another position?

Well, that was both good news and a welcome feature to me!

… that you can round any payload containing numbers with a change node in Node-RED? 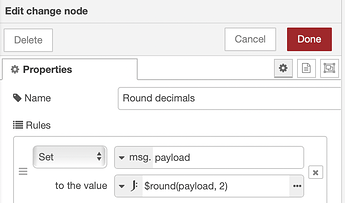 Quite convenient if you want to use the figure in an announcement without hearing a ramble with six decimals or so only a for temperature reading!

… that you can use the join node in Node-RED to create a single payload out of severals? 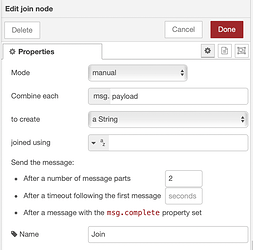 As an addition to the round example above, for instance to include a sensor value in an announcement!

… that I have found my new favorite node that replaces both Bigtimer, Light-Scheduler, Schedex or whatever kind of node that uses timers or the sun settings… heck even the classic inject-node can in a sense be replaced! Don’t even remember if this was included by the team from the beginning or not, but it would be node-red-contrib-cron-plus!

You just need to get the hang of the cron-setting, but it’s not that hard using the intuitive pop-up… the possibilities are endless!