Is there a startup event we can react to in Node-red?

Or some standard in Linux we can react to?

Or maybe a better question. How does everyone deal with possible power outages / blips for getting things back in sync?

A few timer nodes that I use do have the option to run at start-up, that would for instance be node-red-contrib-bigtimer and node-red-contrib-light-scheduler, otherwise maybe this could be something: Trigger a flow whenever Node-RED starts : Node-RED

That’s an excellent question. As you know I’m big on globals and most, if not all are persistent and retain values through reboots/power outages.

After a power loss, I just walk around the house to check on things and they all pop back into sync. I guess I really don’t notice much being out because of the fact I’m in one room when the power died and so everything would be in an off state. I use bigtimer checking against lights being on or off, so those would get back in line within a minute after connecting back to the hub. I just don’t really have a lot of things that would be out of sync per se without something having triggered things back into form.

The problem that I find if you trigger flows when NR starts, you can get some light blinking going on. That happening in the middle of the night could significantly lessen the SOAF (Significant Other Acceptance Factor).

Could you provide some examples that might require a retrigger? In my house, it would only be lights. Modes would pick up where they left off because of globals, so I’m truly at a loss of how to directly address things.

I think that everyone should consider a small UPS for your CORE I think. This will get rid of most of your problems. Technically, I guess, this could even just be a USB battery pack that is charged by the supplied power adapter and in turn supplies power to the CORE, although you would have to find one that can be charged and output power at the same time.

While the CORE is rugged, no system can truly be completely secured from random power outages.

Not sure how to quote from a different thread, but April had a warning about UPSs

Sometimes it’s better not to have a ups. I have my Radios on a powered usb hub and I lost power to the house, but CORE and the sticks remained powered up. ALLLLLLLLL of my battery Zigbee devices jumped to the controller while the powered repeaters were missing in action. I had to panic my network to get things straightened back out. I would have never considered that happening. Not in a million years. Fun times had by all!.

but April had a warning about UPSs

That’s true. You have to keep in mind what can happen with your devices when everything goes down. I have a ups on my CORE, but my radios are not on a UPS. Easier to fix a panicked network than to have to troubleshoot it only to figure out that all of your battery powered devices jumped to the controller. There is no right way here. ONLY information. The rest is by your choice.

Interesting. In my case I have a UPS on the CORE, but I also have a Tesla Powerwall powering all my other devices (and the CORE) so my powered routers (lights, switches, plugs etc) all stay working anyway. Except in the case of really long outages, the UPS is only there to ride out the blip as the Powerwall comes online (up to 100ms or so which is enough to annoy a lot of devices in the house).

NOT an announcement, but something interesting to look at: 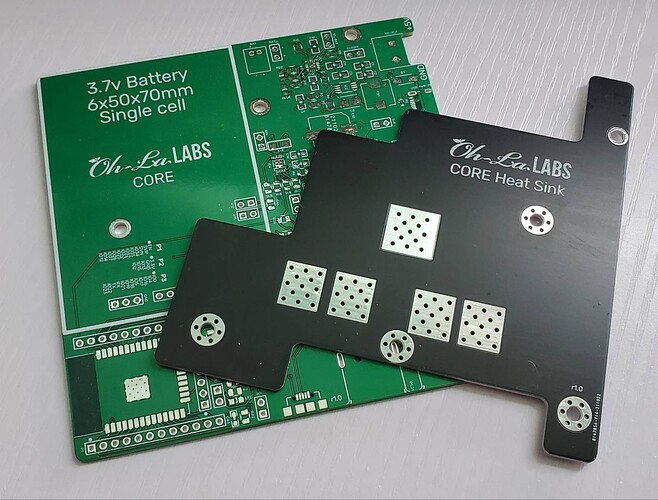 Interesting. What sort of runtime are you aiming for with the battery installed, assuming just a couple of sticks attached to the CORE? What would that be, around 2500mAh pouch cell?

Seems like a wise option and I could really see a good use for it.

Completely separate question: what would you think about me moving my Unifi Controller to the CORE? Good idea or stupid idea? Just thinking of options to perhaps eventually replace my Windows Server with something much lower power and moving loads off it is a good first start.

What sort of runtime are you aiming for with the battery installed, assuming just a couple of sticks attached to the CORE?

There are 3700mAh batteries which would fit this formfactor, so 6 hours could be achieved, not run it down that far though.
There’s quite a bit of features packed into that board, but can’t really discuss it since it’s still not close to ready for production.

what would you think about me moving my Unifi Controller to the CORE?

Does it run on ARM64? I don’t know the requirements of that one, but if it doesn’t need UDP broadcast and can run in a container, sure, no problem. If it needs to run in the main OS, then maybe, Marjebian is MOSTLY compatible with Debian Bullseye but the firewall side of things is different.

Modes would pick up where they left off because of globals

I was thinking about things like mode and presence. Further to make sure locks are secured at proper times and alerts are being sent appropriately.

It may not be a huge issue really. Just figured a quick check at startup wouldn’t hurt.

CORE is rugged, no system can truly be completely secured from random power outages.

This is true. Lol but I will mitigate disturbances as I can… if i can.