My husband and I spent the better part of today working on our wiring nightmare. We decided to move the entertainment equipment from the upper living room to the basement networking closet. We did this first thing in the basement living room, but we weren’t sure of how we’d configure the upper, so we sat on it. And never got back to it. So, it’s been a wiring ball of stress for 3 years now.
We ran 5 cat5e cables to the upper level. There’s absolutely no cat run to the second level. As we worked things out, we decided to finish off the lighting in the stairwell. Here are the before and after photos 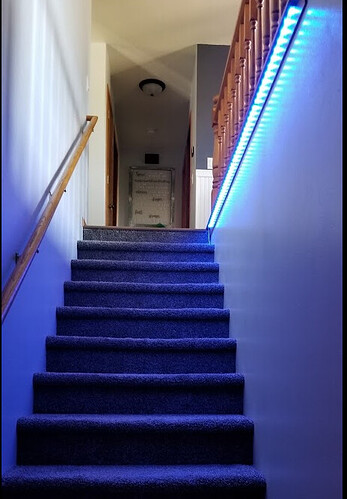 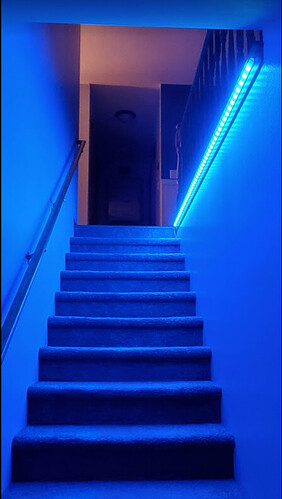 I don’t know that the diffuser did much for it other than gave it a finished look. The LED’s in the rail are lightify’s so they’re a bit larger than the ones you’d normally find. The only benefit of this particular rail is that the line is super straight and you don’t see exposed led strips. What are your thoughts on this? Worth the 26$?

To me it’s a toss-up. I’m also disappointed with the diffuser. OTOH, if it looks more finished then it might be worth it.

Yah, that’s the main purpose for it. I could have gotten different sized ones, but this one is an afterthought since I originally purchased them for the hallway automation. The hall that we can’t put anything in because the heating runs through there and there isn’t enough room. So doing this was actually an added bonus. I should get the rails out and see what they’re going to look with the other kind of LED’s.

When the lights are on, they are meant to be seen. When they are off it would be better if they are not. Does the diffuser make it stand out, or fade into the background more, when the LEDs are off?

I suppose if the strips were in crown molding, with the diffuser, it would blend into a very nice, even light.

Does the diffuser make it stand out, or fade into the background more, when the LEDs are off?

I think that it blends, but this representation is not perfect as we have them attached to the underside of the railing. Here they are in contrast, but gives it a finished look as opposed to seeing a raw strip. Also, I don’t like the lightifys in this diffuser because you can see the joints of the strips. I have another set that looks much better in the diffuser and they distance better from the cover that look better. 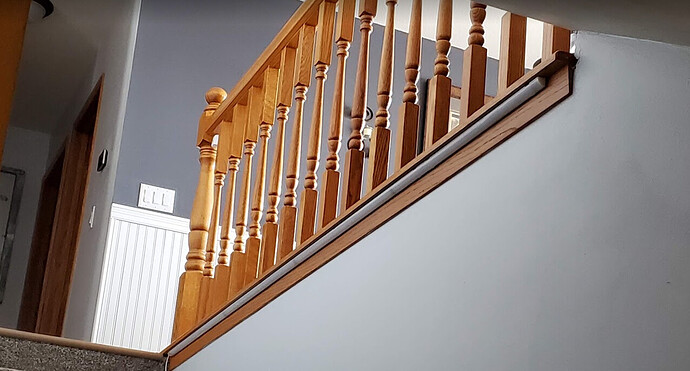 I’ll post a photo of that after they get installed. I’m not sure how quickly that will be. Our electrician is on his honeymoon.

As @TechMedX says, a diffuser won’t do much for visible impact if the LEDs are “eyes forward” as it were. They make a hell of a difference in terms of how the light is cast though, particularly if you’re running strips in upward facing troughs near ceiling height. When they’re off is a different matter, it makes a much less jarring feature to the eye if the run is exposed.

Looks good I’d say, even with the material differences. Well worth the time and effort

Why thank you! I like the aesthetics of of it. An exposed light is much better than an exposed LED. I have other LED’s above cabinets without diffusers and you can’t even see the reflection of each individual light. But get it in eyeshot and you need something to give it a finished look.

When they’re off is a different matter, it makes a much less jarring feature to the eye if the run is exposed

It also keeps everything looking straight and not jagged or bumpy. And you don’t have to worry about the strips sagging and falling off. I’m happy with how it turned out, and I’ve learned a few lessons with this integration. This definitely looks better than an exposed strip. When these die, I’ll definitely be investing in something different with better options. Now that I know what’s out there.

[EDIT]
(For others considering a similar project)
Pro tip:
When installing the diffusers stagger the diffusers so that the diffuser and rail don’t end in the same spot, It’s inevitable that you’ll end up cutting one for a run. Use the short diffuser in the beginning so that the “cracks” are not in line. That will keep your rail looking nice and straight.

Shouldn’t they last your lifetime??? Are strips known for limited life?

Are strips known for limited life?

They can say what they want, but LED’s have died on me in the past. I guess, in a perfect world, but also, these are enclosed now, so I anticipate maybe a bit of heat degradation may occur. Although the controller is under the steps in the basement where it’s cool.

I’ve never had any LED fail on me EXCEPT for the range hood light and an outdoor flag light, both of which were direct from China. At the time they were the only ones I could find with the right bases. Neither lasted more than 18 months and they got uselessly dim in a short time.