Chicken feed to most on here I know, but I’m rather chuffed at getting a stable home assistant install up and running on an old laptop via Ubuntu and virtualbox, it’s not under real load but it’s been managing a couple of rooms I use with no problems. Blazing fast response times in comparison to either smartthings or hubitat.

Spent a happy hour or so this afternoon flashing a Sonoff zigbee bridge over to tasmota and getting it set up, along with Mosquitto and node red (both new to me beyond following discussions online). I’ve also got a D1 mini on order along with an HX711 to build a bed occupancy sensor, not my idea I hasten to point out but a good one nonetheless.

Now debating whether to actually tell my partner I’m transitioning the house away from hubitat or not, as long as it just works she’s quite content…

Blazing fast response times in comparison to either smartthings or hubitat.

Some months back I moved all my automation processing off of HE to NR. More recently I’ve moved the NR server to the same LAN as HE. All of my motion sensors are Zigbee and all of my light switches are Z-Wave+. I calculated the response times from the HE log from when it shows motion active to when the light shows on and found consistent times of 400-500ms. Can you provide the HA analog to my times? I’m very curious about that. I’m also looking forward to seeing the times with CC but that could be quite some time in the future.

I have NR running in Docker (with host networking for speed) and the server also runs Mosquitto, InfluxDB, and Grafana natively. It’s a box with a Core i7 and 6GB RAM so it has way more than enough horsepower.

Certainly, although I’ll be transitioning my sensors across over the next few weeks as time allows.

Anecdotally, I’m using zigbee sensors (a mix of smartthings and aqara) and a Hue hub controlling Hue and Tradfri bulbs, with a few zigbee LED controllers on hubitat itself. In terms of response time, some of the motion activated rules can take a few seconds to react on hubitat. The only direct comparison I’ve got at the minute is my “stairway” automation as I transferred the two smartthings motion sensors across to HA earlier on as a test this afternoon. On hubitat it was common to be near the top of the flight of stairs before the landing light came on, it’s now on as I get onto the first step as the bottom sensor triggers when I walk around the corner and approach.

I’ve been working on moving all of my automations to another platform too.

I am also in love with NodeRed, so I have everything that is currently possible running through NodeRed instead of through HE. I’ve been quite successful.

While I can see the possibilities of node red it’s going to be a steep learning curve, the flexibility of it is quite awesome. I’ve got a couple of simple automations working with it now so confidence is growing.

You’re moving platforms? Why ever could that be

While I can see the possibilities of node red it’s going to be a steep learning curve, the flexibility of it is quite awesome.

This is how the addiction begins. There are experienced people here that will be willing to help you work things out. At least you have the benefit of both communities for input.

I literally have the minimum running on my hubs. 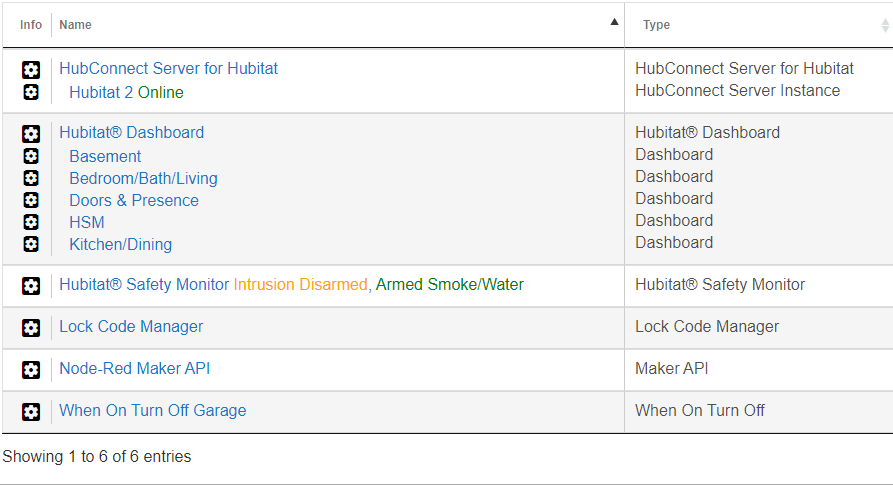 And if you can find a palette for it, you can make it work as long as there’s a connection to the network, etc. in some way. I’ve even integrated google home without the HE hub. There was a box. I kicked it. I will never step back inside of it again.

As an example, here is my kitchen/dining room light flow. There is no such thing as can’t. Maybe don’t know, or won’t. But not can’t.

You’re moving platforms? Why ever could that be

I was thinking moving to something that is going to be friggin AWESOME! But that’s just me.

I literally have the minimum running on my hubs.

You and me both… Looking forward to seeing what you guys are working on. Need a mobile solution for the RV.

Glad to see you’re running HubConnect still… With the RV in storage for the winter, I’m not even using it myself at the moment.